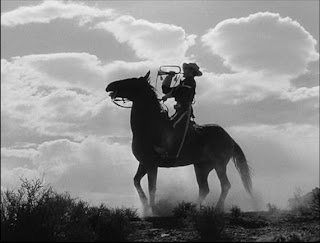 I put off watching this John Ford classic until after I’d seen Broken Arrow (1950), which is on a similar subject, relations between the U.S. government and the Apaches.

The two films have several things in common. Both portray Cochise and his tribe with some historical honesty. Both films were received well by critics when they were new. Both have become somewhat dated, though John Ford fans may dispute that. Both stories get into trouble at the end.
First off, I liked Fort Apache much more than I thought I would. As Captain York, John Wayne has the kind of role I enjoy seeing him in – a man who mixes humor, strength, and good sense. He’s a man’s man. More avuncular than paternal. He’s the moral center of the movie who knows the Apache and doesn’t want a fragile peace to be undone.
Henry Fonda’s Col. Thursday is the perfect opposite. He’s first of all a bitter man, angry that after his Civil War service he was demoted and sent to this god-forsaken outpost on the Arizona frontier. He’s also a heavy-handed commanding officer, a martinet who expects unquestioned obedience to all his orders. It doesn’t matter that many of them are wrong-headed.
What makes Thursday not just overbearing but despicable is his use of authority to further his career ambitions. He will stop at nothing, even when it means certain death for himself and his men in a “last stand” reminiscent of Custer.
The writers. How this all plays out is absorbing and entertaining. A lot is owed to screenwriter Frank S. Nugent (1908-1965). This was his first of several scripts for John Ford. With Fort Apache he has crafted a story with a broad range of well realized characters who interact in ways that keep you watching closely and listening to every word of the dialogue.
The exchange between the two officers and an Indian agent in this clip is a fine example. On one level it dramatizes a collision of personalities, with opposing values and intentions. On another, it sheds an unflattering light on a subject of western history.
Also deserving mention is James Warner Bellah (1899-1976), who wrote the original story, “Massacre,” on which the script was based. Bellah’s career as a writer of western fiction spanned the 1930s to 1950s. He authored 19 novels, and originated the stories that became She Wore a Yellow Ribbon, Sergeant Rutledge, and Rio Grande. With Willis Goldbeck he wrote the screenplay for The Man Who Shot Liberty Valance. 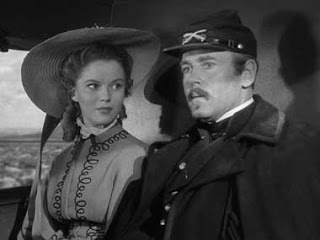 Shirley Temple and John Wayne. Critics have faulted the romance scenes between Shirley Temple (who was 20 years old at the time) and her then-husband John Agar, who plays a young officer fresh from West Point. Early on, Ford has her simpering in a way that maybe reminded audiences of her child-star roles, but it’s not all that flattering now. She comes across more believably in her later confrontations with Fonda, who plays her domineering father.
Wayne is the one who brings the screen to life in the domestic scenes at the fort. He fully inhabits his character and can persuasively explode with anger or impatience, or melt into grins and teasing humor. He walks away with a scene near the beginning when he finds Temple being tiresomely coy with an embarrassed and self-conscious Agar.
I’m not a real big John Wayne fan. He often seems to me to lack range, and his performances can be wooden. That’s the way I feel about The Searchers, which is on most people’s 10 Best Westerns lists. But he is just right in this film, where Ford directs his actors more as an ensemble, and Wayne relates on equal terms with the other actors rather than as a star of the film.
History vs myth. The film seems intended to challenge favorite myths about the winning of the West. While Fonda sees the Indians as ignorant savages, he’s clearly mistaken about them. They exhibit an integrity, intelligence, and bearing that grant them a considerable measure of humanity. They just want a fair deal and have the fire power and the numbers to fight for it.
The film is not specific about the year it takes place. We learn that it’s shortly after the Civil War (1860-65). A recent treaty is referred to, and history tells us that there had been one between the federal government and the Apache in 1867. And we learn from Broken Arrow that the final treaty with Cochise occurred in 1872. So the story could take place in that window between 1867 and 1872. To determine whether Cochise had left the reservation during that time, as the film asserts, would take some more research. 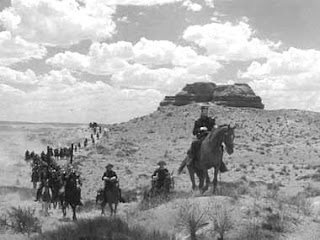 Pause the video on an unfurled flag, and you’ll find the appropriate number of stars – 35. But a somewhat willful departure from reality is Ford’s filming of the story in Monument Valley, Utah. The terrain here is mostly desert and forbidding rock formations. The actual tribal lands of the Apache were in the Chiricahua mountains of southeast Arizona, a less austere and hostile environment.
The ending. So far, it surely sounds like I’m a big fan of this movie. Well, I was until the last reel, and then it all fell apart. In a kind of coda, we leap ahead some years to discover that Col. Thursday has been immortalized as a hero, and Wayne’s Captain York is now in command of the fort.
Not only that. He’s gone through a complete personality change. He’s now a by-the-book officer, wearing Thursday’s foreign-legion style military cap instead of the non-regulation Stetson he’s worn until then. And there’s not a bit of irony apparent, as the officers’ wives watch the men ride off again on yet another mission.
There’s definitely a “print-the-legend” subtext to all this. But Wayne’s Captain York was perfect the way he in fact was. He didn’t need improving by going regular Army. For me, Ford wants it both ways, and it doesn’t work. I wanted to throw my non-regulation boot at the screen. I’d like to know how others have resolved this conflict for themselves.
Further reading:
1867 Treaty with the Kiowa, Comanche and Apache
Picture credits:
1) Bugler, cavalrymen on horseback, Temple and Fonda - fipresci.org
2) Other production stills - doctormacro.com
Coming up: Review of The True Story of Jesse James (1957)
Posted by Ron Scheer at 6:56 AM