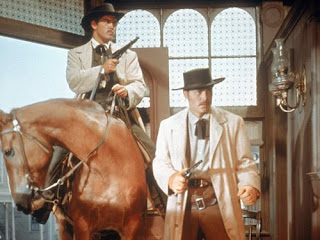 Watching this Nicholas Ray film about Jesse James, you can see Rebel Without a Cause coming around the corner. Jesse and his brother Frank were, of course, rebels with a cause, but Ray portrays them as a couple of misunderstood boys from next door.

The film actually hews fairly close to the story of Jesse (Robert Wagner) and Frank (Jeffrey Hunter). The James family were Southern sympathizers living in Missouri during the Civil War.
During that war, the population of Missouri was torn between Union and Confederate supporters. Even though Missouri had been admitted to the Union as a slave state, it tried to remain outside the conflict by remaining “neutral.”

Still, it provided material aid and sent troops to each side. Guerilla gangs sprang up, attacking Union troops. Frank and then Jesse joined them, and a continued state of civil animosity continued long after Lee’s surrender. It had been neighbor against neighbor and remained so, as we see in the film.
When the war was done, Jesse and James seem to have resumed the lives they had lived outside the law. According to the film, they take to robbing banks to “liberate” Yankee money and get themselves back on their feet financially. The film portrays Jesse as bringing the gang together for their first bank job, but history suggests that Younger and his brothers had been operating already on their own before teaming up with the Jameses.
Myth vs history. While the film simplifies and no doubt misrepresents the formation of the James-Younger gang, much is uncertain from history, and what is known is too complicated for a 90-minute movie. But there’s at least an attempt to provide coherence without venturing too far from the facts. 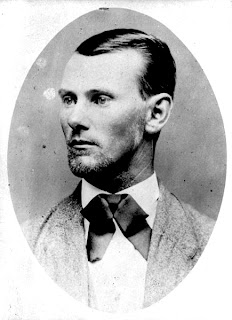 The film glosses over the fact that Jesse was a killer, and there are other details that would be off-putting for an audience in 1957. One for instance is that the gang reportedly wore KKK hoods during a train robbery. After he gained some notoriety, Jesse also became a public spokesman for the anti-Unionists, who were trying to gain political control of Missouri.
It is true, as the film shows, that he married his cousin, Zee (Hope Lange), and the gang was pursued by the Pinkertons (referred to as the Remingtons). We also see their nighttime raid on the James home and the failed attempt of the state legislature to declare amnesty for the Jameses. The point is also made that there was no truth to the belief that the James gang gave any of what they stole to the poor.
Finally, there’s a relatively faithful portrayal of the gang’s failed attempt to rob the bank at Northfield, Minnesota. Also, the film correctly portrays Jesse as being fatally shot in the back by the Ford brothers at his house in St. Joseph, Missouri. In the film, however, Jesse keeps his facial hair minimal right to the end, while a photo of him in death showed that he wore a thick, full beard.

The costuming and location photography give what feels like an accurate approximation of the post-war Civil War period. You are tempted to turn off the lights as you watch and burn some candles to provide the right ambiance.
Jesse and Frank. After all that, the film has a nagging problem. While the rest of the film is immersed in the 1860s, Robert Wagner’s performance as Jesse is not. There’s a smoldering, forlorn earnestness about his Jesse that makes him flat and not too interesting. It would have been more interesting to see Jeffrey Hunter (who plays Frank) take the role. Or James Dean.
But I’m guessing Wagner’s performance is what Nicholas Ray wanted, since his Rebel Without a Cause two years later has a similar central character. In both films, we get a troubled youth out of step with the world around him.
History tells us that Jesse was another sort of man – playful and impulsive. But I recall only one surprising moment from him in the film, when he and Frank dive with their horses from a high cliff into a lake. That comes at the beginning, and while there’s plenty of excitement that follows, Jesse himself is pretty restrained. 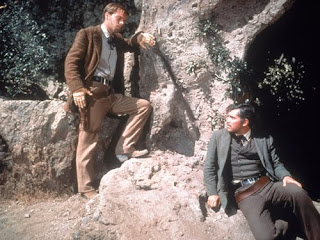 The writers. Walter Newman and Nunnally Johnson get credit for the screenplay. Newman had mostly TV credits during his career. Johnson was known as a producer. In the same year as Jesse James, he wrote and produced The Three Faces of Eve. Earlier, he had produced The Gunfighter (1950).
Other James films have been made over the decades, and it’s hard to name one that does a better job than this one. Cole Younger comes across more memorably in The Great Northfield Minnesota Raid (1972) and The Long Riders (1980), but as in life, Jesse has been harder to capture.
Further reading:
About Jesse James
More about Jesse James
About Cole Younger
Missouri in the Civil War
Survey of Nicholas Ray’s career
Picture credits:
1) Stills from the film, foxmoviechannel.com
2) Jesse and Frank James, wikipedia.org
3) Jesse, portrait, wikipedia.org
4) Jesse, dead, clevelandcivilwarroundtable.com

Coming up: National Day of the Cowboy with picks for the Fictional Cowboy Hall of Fame
Posted by Ron Scheer at 5:41 AM