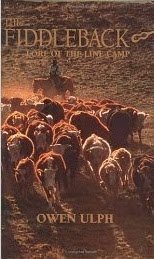 This collection of essays by Owen Ulph (1914-2003) couldn’t be summed up in 500 words, or even 5,000. It’s an extended corrective for every book and movie ever produced about cowboys – an attempt to measure the cowboy’s “true stature.” It’s based on Ulph’s own experience riding with an outfit on a ranch in central Nevada during the 1940s and 1950s.

Ulph was English-born and an academic, with advanced degrees in European history from Stanford. He taught at several colleges and universities in the West, most notably at Reed in Oregon. While his analysis of the cowboy is academic in its depth, it is totally unacademic in its spirit.
Simply put, Ulph loved working cowboys. He admired their independence and a way of life that was at one with the hard physical labor of working cattle outdoors and on horseback. He admired the advanced degree of intuitive intelligence developed on the job by a top hand. 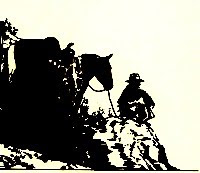 Debunking the myths. A large part of his analysis is devoted to debunking myth and dismantling the cowboy stereotype from the movies. Cowboys, he says, have little to do with guns and fistfights. They seldom develop sentimental attachments to their horses and rarely ride just for pleasure. As a rule, they are not drinkers. They don’t trust the government or any government official or program. They also lack faith in the law. “Anytime you hang your hat on a peg of the law,” one of them says, “don’t expect it to be there when you get back.”
Neither do they believe in “bad luck.” It’s a sign, instead, of a cowboy’s stupidity or bad judgment. They do, however, believe in “good luck,” which when it happens is underserved, a gift of grace. Though while generally not believers in God, they do believe in the Devil.
Gumption. Related to this is a critical character trait among cowboys called “gumption.” It’s an acceptance that, no matter what, a man has no business expecting anything from life. Reduced to simplest terms, gumption is whatever it is that gets a man back on a horse after he’s lost count of how many times he’s been thrown.

While cowboys can be reticent around outsiders, they will talk endlessly amongst themselves about nearly anything, especially if it invites dispute - and nearly everything does. Ulph captures what he can of this in his recording of long line-cabin and campfire conversations among the men who work for the Fiddleback Ranch. Subjects aren’t so much discussed as exhausted, only to be revived again later. There is, for example, one cowboy’s continuing complaint that Ulph mispronounces the word “on’ry” as “ornery.”
The book is eminently quotable. Halfway through it, I started putting in post-its to mark pages I wanted to come back to for this review. There are 15 of them. I can only offer a handful.
As an example of Ulph’s style and his attitude, I offer this sentence as he describes early morning before a day of working cattle:
Anyone who has not savored the silent magnitude of pre-dawn, not from a metal camper parked on a turn-out within convenient sight of a “rest-room,” but as the ever-changing overture to a working day in a remote line-camp, has not lived for any more exalted purpose than to be able to vote for Reagan.
Considering himself a true conservative, he joins his cowboy colleagues in their appreciation for what cannot be bought and sold. And he shares their contempt for the profit-taking, get-ahead style of American-style capitalism. Free enterprise for Ulph’s cowboys is the freedom to do what you do best and love doing and to never treat it as a business. The cowboy who becomes a property-owning rancher loses his credentials as a cowboy.

Mavericks and the cowboss. One entertaining chapter concerns the history of the word “maverick,” written to coincide with the introduction of the Ford Maverick in 1969. Without ever having known Sarah Palin, Ulph comes down pretty close to what the term seems to mean in her lexicon. It’s not flattering, but neither is it derogatory. I think he would have been amused by the way she has appropriated the word for herself.
One full chapter of the book is devoted to the cowboss (not to be confused with the foreman). The cowboss knows every cow on his ranch individually and every square foot of the ranch the cows roam on. He is also freely acknowledged by the men he bosses as the one best among them to do the job.
In this connection, Ulph finds fault with Owen Wister’s Virginian, who gets promoted to cowboss while exhibiting almost none of the required skills. He has too much time for other things, like courting a schoolmarm. And he keeps butting heads with the troublemaker Trampas, who would have been weeded out of a real bunch of cowboys as a liability long before he left of his own accord.
To illustrate the falsity of Hollywood westerns, Ulph takes John Wayne to task for his performance as Dunstan in Red River. One scene of his bullying style of shouting orders, Ulph says, and a crew of real cowboys would turn as one and walk away. Neither did a real cowboss need to defend his right to be boss with a fistfight. Nobody would challenge him to one.
A real cowboss held the respect of his men by being a “perfectionist.” He simply did everything right and made the most difficult task look easy. He gave orders without raising his voice. If he was angry, he was more likely to let his men know by falling uncomfortably silent.
Myth vs reality. Finally, on the subject of myth vs. reality, Ulph comes down 100% on the side of reality. He believes that myth has vulgarized the values that real cowboys have stood for. These values, he argues, are embraced in the oft cited but little understood code of the West, which called for a man to discipline himself so that no one else needed to. It’s a code that doesn’t rest on rights but responsibilities.
That covers a few of my post-its. To get the full account of Ulph’s entertaining analysis, you have to get the book. It’s available in paperback.
Image credits:
1) Cowboy and saloon front, illustrations from the book, based on photographs by Dane Coolidge.
2) 1969 Maverick, onlineredine.com
Coming up: Reviews of Rawhide and The Gunfighter