Robert Ryan was a helluva actor. He was especially good at portrayals of tormented men able to fly into a murderous rage. Howard Hughes put him opposite cool, unflappable Robert Mitchum in noir classics like Crossfire (1947) and The Racket (1951). He’s also good as a rogue cop in On Dangerous Ground (1952). 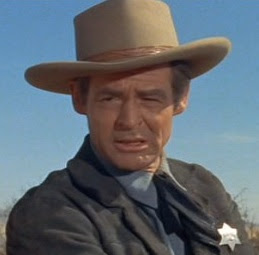 Here he plays a marshal in a western town, tormented again, this time by an incident he didn’t handle well in the past. He “ran away” after shooting down a man everyone believed was unarmed. Now, as chance would have it, the man’s son (Jeffrey Hunter) has shown up in town, and it’s not clear what the young man’s intentions are.
The town seems to be somewhere in Kansas in the early days of the cattle drives. The first bunches of trail cowboys are arriving, and business is already booming. Prices on consumer goods are doubling, and a big new saloon opens up with tables for gambling. The owner, Barrett (Robert Middleton) is a smiling but tough businessman and keeps a few goons on the payroll to intimidate anyone who gives him trouble.
Virginia Mayo is the feminine presence, the keeper of a hostelry. You get the idea from the staff and some asides that not so recently they were all working as prostitutes. Serving up steak and potatoes is apparently more lucrative.
Mayo is Ryan’s sweetheart, and early in the film he somewhat indirectly pops the question. Looks like she’s been waiting a long time for it. But the ring he’s bought her has to go back to the jeweler because it’s too small, which could be a bad sign. Soon after, in an exchange of gunfire in Barrett’s saloon, the marshal sustains a head wound that causes his vision to go haywire at inopportune moments. Luckily he finds a nearby frontier ophthalmologist who seems to have an uncommon knowledge of optic medicine. But the symptoms persist. 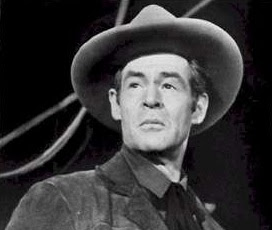 Fast forward. So that’s the set-up. And when we get to the last reel, Jeffrey Hunter has signed on as deputy, having overcome his distrust of Ryan. One of Barrett’s goons has been shot dead trying to kill Ryan. And when an altercation over some cheating at Barrett’s saloon ends in the demise of a customer, the marshal tosses three of the employees into jail.
Alas, a deputy (Walter Brennan) is killed during a daring jailbreak, and there’s a final shootout in a hay barn. The voice of reason (as women usually are in westerns), Mayo wants Ryan to come to his senses and get out of harm’s way. But he tells her, “I’m not a coward. A man can’t live a lifetime being ashamed.”

So Ryan and Hunter go together after the culprits. Despite another attack of blurry vision from his head wound, Ryan proves he is not a man who “runs away.” And for his part, Hunter proves his own worth.
Thumbs up and down. The opening sequence of the film is really promising. We’ve got CinemaScope and Technicolor, and the big screen is filled with long-horned cattle and cowboys on their way to the railhead. Ryan arrives on his horse to tell the men to behave themselves when they come in off the range.
The rest of the movie takes place in town, and the widescreen often feels empty. There are frequent two-shots with one character on each side of the frame and a big space between them (see below). On the other hand, I noticed a credit for a “color consultant” who seems to have done a fine job of creating a color palette of warm earth tones for the costumes. The sets, meanwhile, are brightly lighted, as if for television. The streets are even well lighted at night.

It’s one of those western towns where there is no horse manure in the streets. The interiors are uncluttered, clean, and sometimes not quite fully furnished, like everyone's still moving in. The place hardly looks lived in.
Bodies of the dead are left where they drop, and whether friend or foe, they are quickly forgotten. Ryan and his bride-to-be have an upbeat moment at the end, untouched by the night of violence that has just transpired. 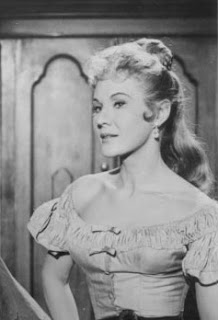 A word about the women’s costumes. I’m no authority on this, but the plunging necklines in this film remind me of Vivien Leigh in Gone With the Wind. A respectabled woman in public in the West of the 1870s and 80s would have been modestly covered from the neck down. Someone correct me if I’m wrong.
Back to Walter Brennan, who gets so little to do in the film. He mostly sits in the marshal’s office reading a newspaper. That’s a disappointment for Brennan fans like me. The man was brilliant as an actor and could wring three dimensions out of any handful of lines a script offered him. But even he can’t do much with this script.
Jeffrey Hunter seems really lost in this film. Either he had a limited range, or director Robert Webb gave him poor direction. I’d go with the latter, since the rest of the film seems under-developed as well. Mexican actor Rodolfo Acosta plays a darkly comic hit man. And the ubiquitous Whit Bissell turns in his usual reliable performance, this time as a jewelry story owner.
Finally, you have to take Ryan’s performance on faith. I like to think that his character really has gone through all the anguish of a man who has lost his self respect and does what he must to regain it. I just wish we’d been able to see more of what lay behind the man’s façade. Poor direction again, maybe.
Myth vs reality. The cows at the beginning come close to evoking the West of history, but even they are not the Longhorns that cowboys would have been bringing to Kansas in the early days of the great trail drives. And a hat tip to the costumers and their color consultant who gave the extras something more authentic to wear than jeans. Otherwise, we’re pretty much in the land of Western myth. Now you know.
Picture credits:
1) Photos of Robert Ryan, dvdbeaver.com
2) Wide shot of Hunter and Ryan, amazon.com
3) Virginia Mayo, jeffreyhuntermovies.com