Celebrate National Day of the Cowboy 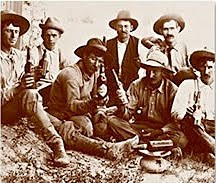 National Day of the Cowboy comes this year on Saturday, July 24, 2010. I’m inviting western writers and fans of western writers to observe the day here at Buddies in the Saddle with a Fictional Cowboy Hall of Fame.

Novels and short stories about the West have helped preserve the values observed in the Code of the West. I’d like everyone reading this to recall the most memorable cowboy characters that western writers have created. And I’m asking you to say a few words about the one character you believe best exemplifies the Code of the West.
Here’s a list of some of the tenets of the Code:
You will find more at the legendsofamerica website.
All nominations for Fictional Cowboy Hall of Fame will be assembled and posted here at Buddies in the Saddle on National Day of the Cowboy, July 24, 2010.
Please join in
Describe a character from a western novel or short story you believe best exemplifies the Code of the West. Word length is not important, but 50-200 words are about right. Include the name of the character, the author and the title of the novel or short story, along with the reason for your choice.
Post your nomination as a comment below. Deadline: July 20, 2010.
Photo credit: northdakotacowboy.com
Coming up: Reviews of Garden of Evil and Rawhide
Posted by Ron Scheer at 7:29 AM