This popular film from the mid-1960s put together three big stars along with Woody Strode as a kind of A-Team sent into Mexico to retrieve a kidnapped wife. Lee Marvin, an artillery expert, leads the group. Burt Lancaster is a dynamiter. At one time, both fought with the revolutionary forces (there were several, Villa, Zapata, and others). Both have become disillusioned and a bit cynical.

Robert Ryan is the horse wrangler, and Woody Strode is skilled at archery. All these actors have lengthy western credits. Writer-director Richard Brooks was better known for dramas like Tennessee Williams’ Cat on a Hot Tin Roof and Sweet Bird of Youth. The following year, he’d hit a homerun with In Cold Blood. But he seems right at home with this western adventure.

The structure of this film is almost exactly like Garden of Evil (1954), reviewed here. There’s a perilous journey by a small group of men who perform a mission and then return to safety with a band of adversaries in hot pursuit. A woman joins them, but this time only on the return trip.
Like that movie, most of the action takes place outdoors – about 95%. This time, it’s the arid terrain of northern Mexico, where it’s hot in the day and cold at night. There are desert, rocks, sand, and slot canyons. A movie like this makes the frontier town settings of a film like The Proud Ones, reviewed here last time, hardly qualify as westerns.
The film was, in fact, not shot in Mexico but in Death Valley and Valley of Fire State Park in Nevada.
Lee Marvin is hard-boiled, never raising his voice, focused on the job, a leader of men. Lancaster is a perfect foil, a comic figure, smiling and laughing, and a lover of women, who can concentrate when he needs to on inventive uses of explosives. Ryan’s character starts out strong, but slips somewhat into the background. Meanwhile, Strode with his bow and arrows gets to play a black Native American, while looking the most athletic of the four. 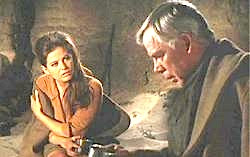 A word about the two other stars, Jack Palance (remembered always as the villain in Shane) and Claudia Cardinale, an Italian actress, remembered by me anyway as the most breathtakingly stunning of the women in Federico Fellini’s 8 1/2. Palance plays the Mexican revolutionary and bandit who has absconded with Cardinale. They each add entertaining and unexpected wrinkles to the story that lead to a surprising endng.
This is a pre-MPAA ratings movie (though rated PG-13 retroactively in 1999, according to imdb.com), so the violence in it is bloodless. A scene in which a trainload of federales is methodically shot dead by the revolutionaries is a grim bit of realism, but it’s shown from a distance. Being “professionals,” our leading men are not at great risk of being killed or wounded, but the Mexicans are expendable and die by the scores. 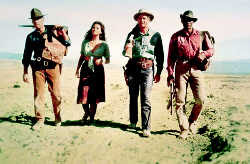 Almost two hours long, the film doesn’t let up on the suspense and tension until it takes a breather near the end for a scene between Lancaster and Palance. Suddenly Richard Brooks the screenwriter peaks out from behind the characters and there’s an exchange about love and politics. Palance says,
You are too romantic, compadre. La revolución is like a great love affair. In the beginning she is a goddess, a holy cause, but every love affair has a terrible enemy. We see her as she is. La revolución is nothing else but a whore. She was never pure, never saintly, never perfect.
Immediately following, like a little demo of this sentiment, Lancaster and a former girlfriend who is an armed combatant have an exchange of gunfire that leaves her dying in his arms – but not before a last kiss.
None of this is played too seriously. We’ve already seen Lancaster without his pants and running barefoot from an interrupted coitus at the beginning of the film (see below). He loses his pants again to three bandits. And he’s about to lose them a third time to a seductive Cardinale who’s after his gun.
The ironies of the film match the mood of the mid-sixties in that passing moment between the assassination of JFK and the escalation of the war in Vietnam. But there’s a strong enough mix of action, adventure, and character to make this story completely enjoyable today. Here is the opening credit sequence, which introduces the characters:
About the writer. The Professionals was based on the novel A Mule for the Marquesa, published in 1964 by western writer Frank O’Rourke (1916-1989). O’Rourke grew up in Hoskins, Nebraska, a very small town near Norfolk in the northeast part of the state. 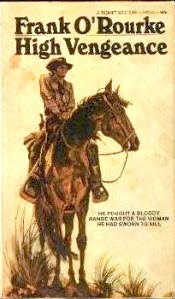 According to his obit in the New York Times, he was during his lifetime a semiprofessional baseball player and worked as a lumberjack and a construction worker.  He had a long writing career which began in 1945 with a novel about his wartime experience in the Army.
Altogether, he wrote more than 60 novels. Able to finish three books a year, he published some under the pen names of Patrick O'Malley, Frank O'Malley and Kevin Connor. He wrote one other novel made into a movie, The Bravados (1958), with Gregory Peck as a man avenging the death of his wife – and one of my favorite westerns.
Myth vs history. By tradition, the revolution in Mexico began in November 1910 and really got going in 1911 with the overthrow of the dictator Porfirio Diaz. There followed a decade of revolution and counter revolution, with Zapata and Villa the best known of the revolutionaries. The Professionals is set somewhere in the middle of that period.
On the plausibility meter you’ve got to apply a heavy dose of suspension of disbelief. Our team of heroes is able to pull off their daring attack on a large rebel encampment largely because the Mexicans (true to stereotype) are noisy, drunk, and numerous. To successfully infiltrate the base, Marvin needs only a sombrero and serape to blend in.
However, Americans like Marvin’s and Lancaster’s characters did get involved as mercenaries. Some were sympathetic journalists, like John Reed, who followed Villa and published his account of what he saw in Insurgent Mexico (1914).
The loss of life in the film is not a real exaggeration. The number of deaths among combatants and nocombatants was staggering. Estimates range from 1 million to 2 million, with another 300,000 swept away by the 1918 influenza epidemic.
Finally, wrapping up this rambling commentary, I had not seen The Professionals until just recently, thinking it was over-violent and that Claudia Cardinale was miscast. But in actuality, it's more like "Mission Impossible," which began its long run on TV that same year. And, never mind that Cardinale is Italian and not Mexican. She's just fine.
Further reading:
The Mexican Revolution