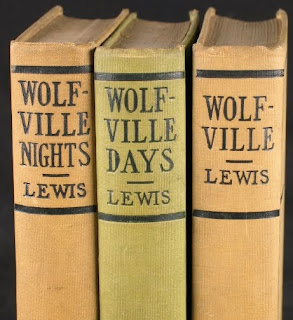 Tag line for today: I read old forgotten books so you don’t have to.

This will be one of those multi-part posts, because old books about the West are a big interest of mine. I know that enough is too much, but I want to share here whatever patience permits. Today’s book is a 1988 anthology of sketches written by Alfred Henry Lewis (1855-1914), selected from his books Wolfville (1897), Wolfville Days (1902), and Wolfville Nights (1902).
Who the heck was Alfred Henry Lewis? Lewis comes out of a 19th-century literary fraternity of writers called local colorists. I’m already in deep water here because I have only a scattered knowledge of American literary history. But I can say this:
If you’ve read Mark Twain, you’ve encountered this kind of writing. Think of Huckleberry Finn. It can be nostalgic and sentimental or humorous and satirical. It’s typically written in a regional dialect and intent on preserving a passing way of life, usually rural. 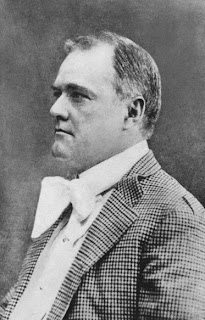 Alfred Henry Lewis (left) comes along at the tail end of that whole tradition. He grew up in Ohio, practiced law in Cleveland and then fled to the West for a time in the 1880s. He worked as a cowboy on ranches in New Mexico and Colorado and as a freighter on an overland line from Las Vegas, New Mexico, to the Texas Panhandle and between there and Dodge City.
Returning to the Midwest, he took up residence in Kansas City. There he began publishing stories in the newspapers about a mythical Arizona town called Wolfville. They were so popular he was soon earning $15 a week writing for the Kansas City Star, and he quit practicing law to devote the rest of his life to writing.
Besides his many Wolfville sketches, he was a fiercely partisan political writer and a friend of William Randolph Hearst. He also had the acquaintance of Teddy Roosevelt and Bat Masterson. He was hugely popular, and readers of western fiction apparently ranked him with Owen Wister and O. Henry.
He is  unknown today.
Which is unfortunate, because he is genuinely entertaining and a window into that period of American social history and the American West in particular. 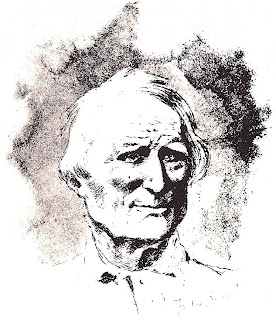 Dramatis personae. The narrator of the sketches is a resident of Wolfville, a man from Tennessee known as the Old Cattleman. Frederic Remington provided illustrations for the early Wolfville stories, which I’m including here along the way. That’s his rendition of the Old Cattleman on the right. The old man spends his time in the saloon or on the hotel verandah – usually drinking and smoking a corncob pipe – where the unnamed writer supposedly finds him and prods him into telling another of his yarns.
The yarns are usually about the dozen or two characters who live in or pass through Wolfville. Some of them may cowboy for a living or drive the stage or offer their services as a resident faro dealer at the Red Light saloon. One is the town’s doctor and another is a deputy. Mostly they seem to have a lot of time on their hands – time to sit around drinking and talking. 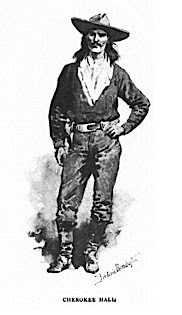 A Kentucky colonel is editor of the town newspaper, The Daily Coyote. One of the women in town runs the OK Restauraw [sic], and another assists the faro dealer, keeping an eye out for any irregularity. (That's Cherokee Hall, gambler, on the left.)
The stories are similar to what you’d find in a TV sitcom. There’s this stable of characters, and some unexpected situation throws them into a comical upset.
The matter is discussed at length and eventually gets resolved after about ten pages of storytelling – or the length of time it takes to consume three drinks. (Add this to Edgar Allen Poe’s definition of a short story.) Resolutions sometimes involve the firing of lethal weapons, and order is restored after an offender is run out of town or carried off to Boot Hill.

The talk is typically long-winded, argumentative, and easily sidetracked in counter productive directions. Any expression of opinion is likely to be disputed, and while voices are never raised, there are often seemingly courteous insults and put downs laced with irony. For me, there is a direct line to the endless debates among the cowboys recorded in Owen Ulph’s Fiddleback, which I reviewed here a while ago. (That's Doc Peets on the right.)
Style. What makes these stories genuinely entertaining is the way they are told. The Old Cattleman, speaks in a mix of Southern and Southwesternisms, drawing heavily from the language of cowboys, gambling, and mining terminology. He’s unschooled and unrefined, yes, but not ignorant. The old guy is wise about most things as a tree full of squinch owls, to borrow one of his phrases.
I can’t read something like this without trying to understand what a writer is doing that’s striking me so funny. I’ll close off today with an attempt to put into words a small part of what I found.

For starters, the narration is written in a mock inflated style. What does that mean? It pretends to be formal while making fun of formality. Multi-syllable words straight from the dictionary are mixed freely with slang, malapropisms, skewed syntax, and chopped logic. Technically, this is called mixing registers. (That's Old Man Enright at the left.)
Words are spelled to mimic a regional dialect: "allers" (always), "oughter" (ought to have), "yere" (here). Familiar words are put to new uses, such as “some” (meaning somewhat, e.g., he was some puzzled) or “a lot” (meaning quickly, e.g., you better hit the trail a lot). Or dropping the –ly from adverbs (e.g., he went for his gun immediate).
Pronouns include not only you-alls, but we-alls, and they-alls. “Which” functions as an all purpose relative pronoun, usually meaning “and” or “but,” and can be found at the beginnings of sentences even as the first word of a story.
Language is often figurative and mixed with unexpected analogies. Some examples:
higher than a cat’s back
at home as a drunkard at a barbecue
sufficient to make a graven image ketch its breath
devoid of expression as the wrong side of a tombstone
If there’s a direct way of saying something, you get some humorously round-about circumlocution or euphemism instead. Some examples:
culminatin’ in a rope  = getting hanged
I entertains idees sim’lar = I agree
jump into the misty beyond = death
I’m some employed placin’ myse’f at the time, an’ don’t dicern it none = I’m too busy ducking for cover to notice 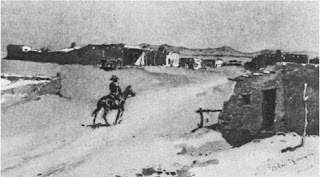 For a longer example here’s Deputy Jack Moore warning Shotgun Dowling to get out of town:
My notion is that you better pull your freight some instant. Thar’s a half-formed thought in the public bosom that if anybody sees your trail to-morry, all hands’ll turn in an’ arrange you for the grave. (p. 160)
There is both exaggeration and understatement, one often pretending to be the other. Here’s an example:
It’s about this time, too, the stage gets held up sech a scand’lous number of times it gives people a tired feelin’. All by one party, too. He merely prances out in onexpected places with a Winchester; stands up the stage in an onconcerned way, an’ then goes through everythin’ an’ everybody, from mail-bags to passengers, like the grace of heaven through a camp-meetin’. Nacheral, it all creates a heap of disgust. (p. 7)
The Old Cattleman, of course, isn’t trying to be funny, just entertaining. Neither is Lewis making fun of him or anyone in Wolfville. When you laugh, you’re laughing at the human comedy.
More next time.
Further reading:
Flournoy D. Manzo, “Alfred Henry Lewis: Western Storyteller,” Journal of the Southwest, 10:1, (1968), 5-24.
Picture credits:
1) Spines of Wolfville novels, dargate.com
2) Photo of Alfred Henry Lewis, Journal of the Southwest
3) All illustrations by Frederic Remington
Coming up:
Posted by Ron Scheer at 7:00 AM