My commentary continues for those who haven’t read enough about this entertaining example of early 20th century American humor. 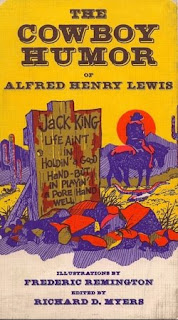 About cowboys. The name of this collection is somewhat misleading. Lewis’s stories are not about cowboys. They take place mostly within the city limits of Wolfville and rarely venture out to the open range.
Wolfville is, in fact, a mining town, and you might mistake it for another famous mining town in southeastern Arizona – that being Tombstone. However, while Doc Holliday might show up at the dance hall in Wolfville (and does), there’s no reference to others whom history tells us took up residence in Tombstone. There are no Earps or Clantons or anyone much resembling them. There’s an OK establishment, but it’s a hostelry, not a corral.
And while we’re on the subject of real people, the Old Cattleman has in fact made the acquaintance of Tom Jeffords of Tucson, who helped broker a peace treaty with the Apaches (a topic covered in the review of Broken Arrow, which appeared here previously). He finds Jeffords a bit odd, but doesn’t dislike him.
But he doesn’t have much to say about cowboys. Most of what the book has to say about them is in an opening essay ("Some Cowboy Facts," from Wolfville Nights) in which Lewis speaks in his own words. And he doesn’t contribute a lot that we don’t already know. 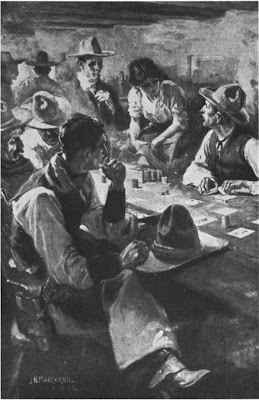 They were out on the trail for months at a time, he notes, and generally comported themselves professionally while on the job. A trip into town, however, when the work was done, was opportunity to cut loose and spend every cent of a cowboy’s pay. Which could take one or two weeks.
The money went for liquor, gambling, and any other form of “action” (unspecified). Only a handful of rules required enforcement: 1) no insulting the ladies, 2) no use of firearms indoors, 3) no riding your horse indoors, and 4) no riding your horse on the sidewalks.
If there’s a theatre in town, a cowboy might smuggle a rope into a show and lasso a female performer from the stage. Afterward, should she be willing, said cowboy may escort her to the dance hall where they’ll dance until dawn.
Cowboys were fiercely clannish, looking after their own, from setting their broken bones to springing them from jail if need be. They could squander their earnings on a few luxury items, like fancy hatbands, spurs, saddle, and leggings.
A saddle might be of Spanish leather with gold trimming. Rattlesnake skin hatbands were apparently common – under a belief that they worked as a cure for headache. The chin strap for a hat (always worn against the back of the head) might be strung with poker chips, a red, a yellow, and a blue. 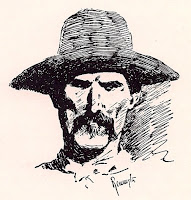 Chaps were often made from the fur of a Newfoundland dog, the long hair keeping out the wet weather. In earlier days, cowboys wore red silk sashes. [My note: This is something you’ll see in Gary Cooper’s portrayal of the Virginian in the 1929 remake of that movie.] According to Lewis, these were useful in roping up cattle in the days of the open range.
A cowboy, he notes, doesn’t express curiosity about another man’s past, where he’s from, or his real name. Until acquainted, he calls another cowboy “sir” and expects the same in return. It was impolite to even steal a glance at the brand on another man’s horse. And, of course, you never asked to examine another man’s gun.
Singing to calm the herds at night, a cowboy might give voice to the sentimental account of the “The Dying Ranger”:
The sun was sinking in the West and fell with a lingering ray,
Through the branches of a forest where a wounded ranger lay;
A group had gathered around him, his comrades in the fight;
A tear rolled down each manly cheek as they bid his last goodnight.
The five remaining verses can be found here.
All in all, Lewis speaks well of these workmen of the range and finds them on the whole to be worthy of respect for their courage and their “sober quiet dignity.”
Indians and Mexicans. The Old Cattleman has little good to say about either of these ethnic groups. As we’ve seen before, Mexicans are summed up in the general stereotype of “greasers.” About Indians, he has a great deal more to say, and it’s not a portrayal without complications.
In general he finds Indians to be savages with the intelligence and manners of ten-year-olds. On the other hand, he doesn’t seem to fault them much for scalping and killing whites. He understands it as a reasonable reaction to the white man’s uninvited invasion of their tribal lands. 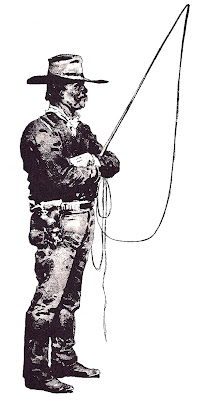 The old man tells of appalling treatment of Indians which he doesn’t seem to object to. When an Indian makes an unsuccessful attempt to get on the stage, the driver knocks him back onto the ground with his rifle butt, and then the man is killed when the departing stage rolls over him. (That's Old Monte, the stage driver and town drunk at the left.)
Stopped by the deputy sheriff and told that he has to take the dead Indian with him, Old Monte ties the Indian to the coach with a rope and drags him out of town, finally leaving what’s left of the body in a tree. No judgment is made. Pretty grim and probably pretty typical of frontier attitudes.
Telling of time he once spent with the Osage Indians in Oklahoma, however, the Old Cattleman strikes a different note. He gives a long account of the ritual courtship and marriage of a young Indian couple, which is matter-of-fact reporting and nonjudgmental. It reads much like an anthropologist's appreciation of a different culture.
He also tells a story told to him by a “Sioux Sam,” about a rivalry between two medicine men. Unlike the local-color humor of the rest of the collection, this story is told like a folk tale, completely serious and without irony. I can only guess that Lewis had mixed opinions about Indians himself and that this is reflected in the variety of ways they show up in the stories.
Next time. I can’t read a book like this without reaching for a dictionary when I don’t know the meaning of a word or phrase. Lewis’s stories are thick with slang, jargon, unconventional idioms, you name it, and it took me a couple extra days to get through this book as a result. I had to rely on several online references, plus Ramon Adams’ The Cowboy Dictionary. Some terms I didn’t find at all.
The third and final installment of this commentary will be devoted entirely to a glossary of the most colorful and unexpected expressions I found in the book. You want to know how plain folks expressed themselves on the frontier, this will give you an idea.
Picture credits
1) Illustration by J. M. Marchand from Lewis' Faro Nell and Her Friends, 1913
2) Drawings of Texas Thompson and Old Monte by Frederic Remington.
Coming up: A Wolfville glossary
Posted by Ron Scheer at 6:10 AM