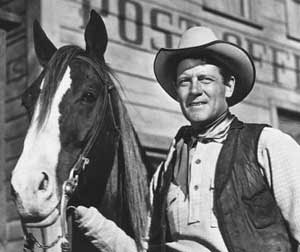 I wrote last time about Bill Pullman’s remake of The Virginian for TV in 2000. This is a look back at a previous version with all-around cowboy actor Joel McCrae as the Virginian and Sonny Tufts as his friend Steve. Conceived as a colorful family picture, with elements of light-hearted comedy and a few dark shadowy elements, the film has hardly a hint of historical accuracy. Medicine Bow, in 1880s Wyoming territory, which Wister describes as no better than squalid, appears here with all the generic splendor of your standard back-lot street of western storefronts.
Pullman’s version of Medicine Bow is closer to reality – a haphazard and raw scattering of wooden structures with lots of space between them. There are few signs of life, unlike the bustling frontier towns frequently found in 1940s and 50s Hollywood westerns. The realism stops there, however, as the open areas are grass-covered rather than rutted and dusty or ankle-deep in mud.

Wister created an even more sordid picture in the novel – with the added detail of trash-strewn areas where residents and cowboys tossed away their empty tin cans and other refuse. He also describes a communal wash-up stand outside the town’s eating establishment, where a single towel is provided each day. It is filthy with use long before the day is well started. Men in the flop-house hotel sleep two to a bed – while beds last. The narrator has to make do with sleeping on the counter of a general store, and counts himself lucky. 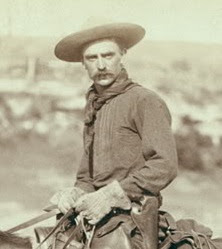 Meanwhile, the cowboys in the 1946 film wear modern potato-chip brim hats and jeans, with no concern for what a working cowboy might have worn at the time. In contrast, the popular “Boss of the Plains” Stetson, introduced in the 1860s was a flat-brimmed affair with a dome-shaped crown – which could be shaped in various ways, though old-time photographs show them mostly unchanged or with the crown pinched on four sides into a peak.
Also, ignoring the fashion of nearly every adult male of the 1880s, the men in the film are clean shaven. The only exception among the film’s main characters is the villain Trampas, played by Brian Donlevy, who has the merest suggestion of a mustache, no doubt intended to make him look sly and devious. Beards in 1940s westerns are typically a sign of grizzled age or villainy – or both, as is the case with Walter Brennan as Ike Clanton in My Darling Clementine. (It's also possible that Hitler and Stalin put facial hair out of style for a generation.)
Of all the versions of the film, the one from 1929, with a very young Gary Cooper as the Virginian, is arguably the best. Of all the actors who have played the part, he comes closest to Wister's original conception of the man - young, lean, handsome. McCrae was 40 when he played the part - nearly twice the age of Wister's hero.
The 1929 version also includes the baby-switching scene (described last time), which reflects more of the young cowboys' ambivalence about marriage, family, and settling down. Showing the playful, teasing, practical-joke side of the Virginian, as Wister does, we get a more rounded and less stereotypical portrayal. Like Lonesome Dove, what the novel needs is a mini-series to bring what is a wonderful story to full life on the screen. Until then, we have these partial successes.