Guns and violence. Culley’s arrival at the Bell Ranch in 1894 was ominously marked by three violent deaths. The previous range manager, “Baldy” Hughes had been shot dead in his room at the ranch by an apparently disgruntled cowboy before collecting his pay and leaving. When Culley, his wife and child took up residence there, the blood had not yet been cleaned up. 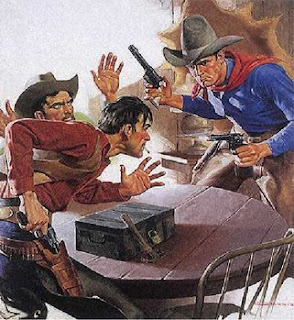 Another cowboy had just died accidentally when his gun fired while he was on a bucking horse, and a fence rider was found at his camp hacked to death with axes by unknown assailants. The job of men at fence rider camps included surveillance for cattle thieves, who may well have taken exception to a job too well done.
In connection with this, Culley provides a character sketch of a bartender Jack Pressley, who was hired to live near the fence to keep an eye on a cattle rustler, Lester Hall, who lived just on the outside. Without drawing a gun, Pressley was apparently able to put a stop to Hall’s beef stealing. Culley notes that many an unsung man like Pressley helped preserve order in the West simply by standing firm and refusing to back down.
Culley observes that fistfights were rare in those days. Differences if they went as far as physical violence were settled with guns. He talks of how as a 140-lb. man he was obliged to use verbal persuasion to turn away a threatened assault. All this may account for why it was illegal in New Mexico after 1885 to carry a firearm on a roundup. A cowboy who owned one had to keep it in his bedroll.
Diplomacy. An advocate of diplomacy over gunplay, he tells an amusing story of an Easterner in a bar who confronts a drunk and noisome cowboy and gives him five minutes to leave. When the cowboy promptly departs, the Easterner was asked what he’d have done if the cowboy had refused to go, and his was reply was to “extend the time.”
As testament to his diplomatic skills, he writes of being given the thankless task of removing Mexicans from the ranch who’d been living in settlements there for generations. Culley says he never shared his Texan colleagues’ contempt for Mexicans, a trait he attributes to the defeat at the Alamo. He found Mexicans to be intelligent, with a well-developed culture. He gives himself credit for using his knowledge of Spanish to persuade them to relocate without serious incidents. It probably took more than that.
Finally, there are scenes in western movies of locomotive operators having a little “fun” by blowing the train’s whistle to startle a herd of cattle or horses. This happens in Tom Selleck’s version of Monte Walsh, a scene that ends in a free-for-all between the cowboys and the train crew.
Culley recounts how after a long day of gathering some difficult mustangs, a CB had his work undone this way by a Santa Fe railroad engineer, who for his trouble got three rounds from a .44 carbine through his locomotive cab.
Picture source: sodahead.com
Next time: The bandits of frontier New Mexico
Posted by Ron Scheer at 5:56 AM