Here’s the last installment from John (Jack) Culley’s reminiscences of ranching on the frontier of northeast New Mexico in the 1890s. 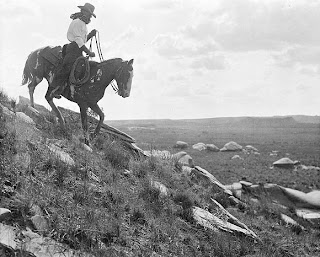 Billy Parsons, cowboy. Billy, who worked at one time for Culley, was one of the first generation of cowboys after the Civil War. In 1875, he was about 20 years old, the son of a lawyer, and living in Kansas City. He’d studied to be a telegraph operator, but suffered from ill health. At the suggestion of a Texas cattleman he took a job as a cowhand in hopes that work in the outdoors would improve his condition. And so began his life-long occupation in the saddle.
Billy thus saw the start of the great cattle boom that eventually filled the open ranges of the West with an estimated 21 million cattle before it ended in the blizzards of 1889. Reading Culley, you learn that summer and fall months during that time required a massive work force. Men from nearly all walks of life and from many different countries found employment as cowboys. Not all, he notes, were suited to the work.
A fraction of these cowboys worked year round. Billy followed herds for various employers over vast areas of a half dozen different states, wherever there was open grassland. Sometimes he might work as an “outside man,” traveling with other wagons to retrieve stock that had wandered off from the home range.
In winter he might travel with a “floating outfit” to brand calves that had missed the fall roundup and to help rescue cattle bogged down in mud during spring thaw. He once had the memorable experience of delivering a herd of cattle to lawman Pat Garrett.
As Culley describes them, cowboys wore guns in their hip pockets. He writes that Billy shot himself twice, once in the cheek and another time in his leg, when his gun fell from his pocket and discharged.
Small in stature, he was no more than 130 pounds, typical Culley says of many cowboys of the time. He rode standing straight legged in his saddle. A reserved man of raw courage, he was still living at the age of 84, with his daughter in Southern California. 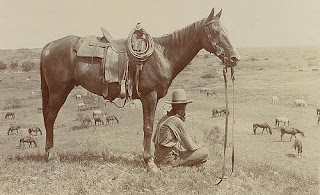 Night wrangler. I never knew much about wrangling horses on the range except that it was an inglorious task and an entry-level position for rookie cowboys. Culley reports a conversation with a friend, Stan McKellar, who liked being a night wrangler.
Observing the horses at night, he noticed that they grazed until about 11:00 and then rested until 2:00. So he took to sleeping on the ground with his slicker over him for those three hours.
Since the outfit didn’t hobble their horses, he had to take precautions for the string of horses brought in by any “visiting” cowboy (a rep or outside man). To prevent them from heading back home in the night, he took to sleeping on the side of the herd between them and the ranch they came from.
New Mexico cowboys. In general, the cowhands Culley knew tended to be men of few words – well chosen, but terse. He tells of one foreman who never spoke except to give orders. New Mexico cowboys tended to disapprove of the ones from Texas, he says, because they were considered too talkative.
While profanity was the common form of expression, not all cowboys enjoyed bawdy talk. He tells of a night when talk got loose around the campfire, and one cowboy spoke up to say he didn’t appreciate it. Whereupon there was an embarrassed and prolonged silence.
Few were drinkers, except when a trip into town after several months was the occasion for a good bender. Then there might be target practice on the saloon lights or going outside to bring in their horses. But the most irresistible pastime, he says, was the poker table.
Love on the range. Culley’s last chapter concerns the unreality of western romance fiction in which a cowboy and a pretty miss fall in love. He blames Owen Wister for getting this business started.
In reality, cowboys spent sometimes months on the range without ever seeing a (white) woman. In the off-season, they might attend a square dance in town, where young women sat against one wall and the young men milled against another. Which offered little opportunity for boy-girl romancing.
Their lack of social refinement made most cowboys self-conscious and fiercely respectful around women. Until they got older and were able to acquire some assets, their prospects as marriage partners were limited anyway. Race was an added factor. While there were perfectly respectable Mexican families with marriageable daughters, prejudice kept most whites from mixing with them.
After taking Zane Grey and other writers of cowboy westerns to task, Culley argues that the cowboy isn’t suited to fiction of any kind. The role of the working cowboy has been “the most intangible feature of that intangible thing that is the history of our America. It would be a good thing if the story tellers would keep their hands off it.”
Picture credits: Erwin Evans Smith, Bonham, Texas, photographer
1) Zack T. Burkett going down a steep incline on his cow pony. LS Ranch, near Tascosa, Texas, 1907; cartermuseum.org
2) Texas horse wrangler, 1910; Library of Congress Prints and Photographs Division
Next time: A reading list of cowboy memoirs
Posted by Ron Scheer at 6:33 AM