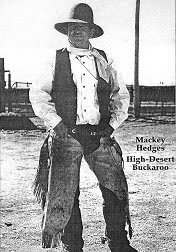 Poking around on the Internet I discovered that one of my favorite cowboy novels, Mackey Hedge’s The Last Buckaroo, has been given new life with a new paperback edition. It’s not Louis L’amour or Elmer Kelton but a faithful description of the life of a cowboy in the latter half of the twentieth century – and written by a man who cowboyed all his life for a living. At the risk of repeating myself, this is what I wrote about it several years ago when I found a copy at the Los Angeles Public Library (it has been out of print for most of the last ten years):
This is one of the best books I've ever read describing the day-to-day, real-life work of cowboys. There is something of a story to follow in this novel, but once you get past the fairly far-fetched antics at the beginning, you're treated to an informative description of what it's like moving from one ranch job to the next -- each time getting used to a new boss, a new bunch of cowboys and horses, and the conditions of various kinds of ranch operations and cow camps in various seasons of the year. There are a few digressions, as Tap the narrator in his sixties recalls adventures from earlier times. Mostly it's the absorbing accounts of working cowboys who seem completely real, like they could walk right off the page.
The novel is set in the Great Basin of the West, so the lingo, the gear and the cowboy way are buckaroo-style, harking back to the vaqueros from old California. The terrain is mostly Nevada and Oregon. In northern California the two heroes take jobs packing dudes into the mountains. Later they settle down for a while working in a huge feedlot operation. There's also a side trip to Arizona, where our boys fetch up with an outfit of Apache Indian cowboys, and the author explores in fascinating detail the uneasy relationship between white cowboys and their Native American counterparts.
It's also a story of friendship, as old-timer Tap acquires a young, greenhorn sidekick, Dean, who knows kickboxing but not much about what it takes to be a cowboy. Over the seasons and years, the boy learns a great deal, giving the reader a chance to learn some things along with him. The author captures the romance of cowboying without denying the discomforts, the dangers and risk of accident and injury, and the potential for conflict between men who don't get along. The novel is punctuated with several violent fights, and there are two or three accounts of accidents sending cowboys to hospital emergency rooms.
This book was a great pleasure to read. I'm happy to recommend it to anyone with an interest in cowboying, ranching, and the West.
Hedges tells the story on his website of how the novel got written and published. You can order it from amazon or directly from him.
Posted by Ron Scheer at 2:33 PM