One of the returning soldiers from WWII was the much-decorated Audie Murphy. His wartime experience “to hell and back” contributed to a Hollywood career that included over 30 westerns. In this one, he puts on a black hat to play a gunman, with mixed results. 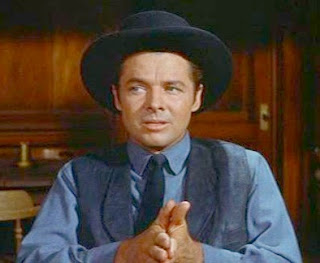 Right off, I’ll say that I like Audie Murphy. He is so improbably short and boyish-looking for a western hero. You root for him, even when he’s cast as a bad guy in this film.
The set-up is simple. Audie’s reputation as a hired gunman precedes him to a western town, where his presence makes most everybody nervous. His M.O. is to accept a contract on a man and then provoke him into drawing first. Killing him then is always self-defense. We get a similar situation in Shane where Jack Palance fatally provokes a homesteader into pulling his revolver.
The film is a cross between a bounty-hunter story and a who-dun-it. There’s more than one man in town feeling guilty about something, and we have to wait until the end to find out which one Audie’s been paid to bump off. It’s a telling detail that there’s no particular honor in killing any of the potential candidates. This must have been a tough script to make work.
No Name on the Bullet is a Cinemascope, color picture, but after the opening scene in which Audie rides across a handsome western landscape (like the opening of Shane), most of the film takes place in town and indoors. There seems not to have been much budget for dressing the sets either. The interiors are brightly lighted, as if the film was intended for TV, and most seem almost empty of furnishings.
Audie is handsome in his dark outfits, but he seems to lack the range to play the complexity of a professional killer. He’s mostly business-like and well mannered, never cracks a smile, plays chess, and when he goes into a bar, he asks for a cup of coffee. In the hands of a Jack Palance or Lee Marvin, this would all come across as engagingly sinister. Not so, Audie.
Two bickering codgers provide comic relief, a handsome doctor (whose father is the town blacksmith) befriends Audie, and the doctor’s girlfriend plays the requisite voice of feminine reason and domesticity. Her father is a retired judge, living out his last years in a wheelchair. Willis Bouchey plays a likable sheriff, and the ubiquitous Whit Bissell plays the town banker, who (not too plausibly) goes off the deep end.
At only 77 minutes, this western still seems long. You may want to look for a film with Audie playing a hero instead.
Picture credit: avclub.com
Next time: Women writers of the West
Posted by Ron Scheer at 6:14 AM