OK, IGN has picked their top 25 western movies of all time, and what it proves is that even gamers can get things wrong. Without challenging some of their choices, let me add my own list of honorable mentions: 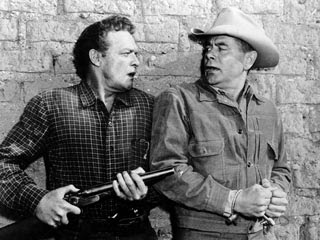 1. 3:10 to Yuma – The original film with Glen Ford and Van Heflin, based on Elmore Leonard’s story. The cat and mouse game that their two characters play in a hotel room, pitting honorable man against  likable and cleverly duplicitous outlaw is the Western code of ethics pared to its essence. I love this film. It’s simple, clean, and utterly believable. It doesn’t need the remake’s spectacular stagecoach robbery at the beginning and the bloodbath at the end to make it any better.
2. Seven Men From Now – The best film of the under-sung writer-director team of Burt Kennedy and Budd Boetticher with super-smooth and handsome Randolph Scott as hero and wonderful Lee Marvin as villain. The most powerful scene takes place inside a covered wagon in a rainstorm as Marvin charges the atmosphere with sexual innuendo while two men and a married woman listen with growing discomfort.
3. The Hired Hand – Peter Fonda’s fine three-character film with such a simple premise you can write it on a postage stamp, and it carries a tsunami of emotional power. I already discussed this film a while ago. 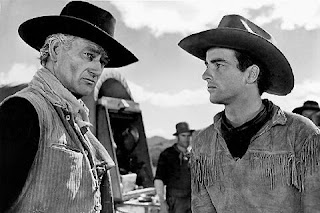 4. Heaven’s Gate – Lest anybody think I’m only a fan of small films, this gigunda, while overlong and over the top in places, is a graphically told story of the Johnson County War with an all-star cast and sweeping evocation of the frontier era and its role in national history.
5. Red River – Somehow this classic cattle-drive film with John Wayne and Montgomery Clift didn’t make it to the IGN list. Grand in scale, with its share of shootings and Indian attacks, it manages to devote most of its story to what cowboys actually did in the Old West – herd cattle.
6. Dances With Wolves – I know, people hate this politically correct portrayal of racism on the plains and the noble Sioux warriors whose land is being taken from them. Hollywood revisionism at its worst, some say. Maybe Native Americans even hate this film, but I loved it when it came out and still do.
7. Open Range – This is an homage to all the great elements of the genre and a fine film in its own right. Robert Duvall who is mysteriously missing from the IGN list does a reprise of his role from Lonesome Dove, which apparently doesn’t qualify since it was a mini-series made for TV. Costner does fine, too.
8. No Country for Old Men – Maybe not a western per se, but the location is right (Big Bend of Texas) and the lawlessness of the Old West reigns again, overwhelming the paltry efforts of law enforcement to contain the brutal excesses of its outlaws. It may as well be 1870. 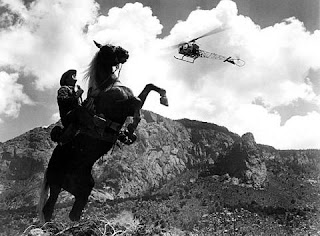 9. Brokeback Mountain – OK, maybe I’m stretching it here, but we got men in cowboy hats and plenty of western scenery, plus Willie Nelson during the credits. This film takes the theme of male bonding prominent in many westerns to “the next level.” Not that there’s anything wrong with that.
10. Lonely Are the Brave – Kirk Douglas plays a modern-day cowboy, who like Don Quixote is still living in a mythical past – a West of the open range, where a man and his horse are free to roam and live by a code of ethics no longer recognized today. Best performance out of these top 10, by the way, by a horse.
That’s my quick and dirty list for top 25 consideration. Others are free to disagree. Let's hear your own.
Posted by Ron Scheer at 3:31 PM