I like memoirs of life in the Old West because they are often treasures of social history so hard to come by any other way. You can learn so much about everyday life – not just what people did but their attitudes, values and assumptions. Memoirs have the added perspective of single individuals who lived their lives immersed in that world. 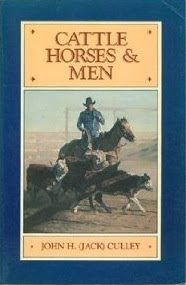 In my opinion, they’re a gold mine for writers concerned with historical accuracy (a subject that’s been discussed at length recently on the blackhorsewestern list at yahoo). The sad truth is that these books are often out of print and you have to go to rare and used booksellers or libraries with deep or specialized collections to find them.
That’s why I’m sharing in the next installments some of what I learned reading John H. (Jack) Culley’s book Cattle, Horses and Men. This book about the 1890s in northeast New Mexico was originally published in 1940. Culley was range manager at a huge spread called the Bell Ranch. This big cattle operation was (and still is) located midway between Tucumcari and Las Vegas, New Mexico.
Culley, like other cattlemen of the period, was a Brit, from a wealthy family in northern England and well educated. He’d studied at Oxford, and his background shows in his writing. He has a leisurely, polished style that enjoys irony and understatement. He can tell a good story. I would love to have heard him tell a few in his own voice.
The Bell ranch. Culley outlines the history of the Bell from its beginnings as a Mexican land grant to Pablo Montoya in 1824. Until 1868 it occupied the hunting grounds of plains Indian tribes, including the fierce Comanche. Forts were built in 1851 and 1864, the latter on the grant itself. But because of the Indians, Montoya may not have ever lived there, and Charles Goodnight’s trail from Texas to Colorado stayed well to the west of it until 1875.
The cattle operation on the Bell dates from 1872 after a new owner took possession, Wilson Waddington. His seems to have been a wild and reckless tenure, the man being something of a high-roller. Culley describes the lifestyle of the time as “tough and desperate,” the behavior of men of position and authority characterized by heavy drinking, high-stakes gambling, and disregard for horses. 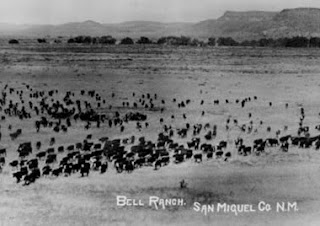 During that time, barbed wire was introduced in New Mexico, and the ranch was fenced in by 1881. At 750,000 acres (1,172 sq miles) it took 128 miles of fence. It would take a fence rider two weeks to make the full circuit, Culley says, partly because so much of it crossed rough terrain.
The Bell acquired its current name when the ranch changed hands in 1894. Arthur Tisdall from the JA in the Texas panhandle became general manager, and he hired on Culley who was then 30 years old, married and the father of one child. Tisdall and his successor Charles O’Donel were Irishmen, and Culley notes his appreciation of these men for their judgment, refinement, and character.
The ranch raised Hereford cattle, a superior breed to the Texas longhorn, which was good for tallow and hides but not much for meat. Goodnight’s JA was already a Hereford operation in the 1890s, which if I once knew I’d forgotten. There’s a panoramic view of the Bell herd at the Library of Congress, dated 1914. The image above is a small detail, and you can find the entire photo here.

The ranch gets its name from a bell-shaped formation that rises out of the flat valley floor. The ranch has its own website, which includes an excellent 6-minute video of how it looks today, with commentary by Bert Ancell, current ranch manager.
Reduced in size over the years, it’s still a respectable 290,000 acres. It’s also for sale. You can have it for $103 million, and that includes livestock and equipment.
Next time: Guns and violence
Posted by Ron Scheer at 6:36 AM