First a caveat. I’ve written several hundred reviews over at amazon, but I’ve never written a review of a six-gun western before. So have that shaker of salt ready. 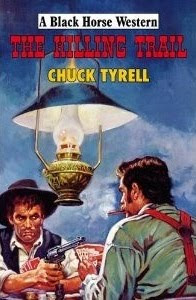 Author Chuck Tyrell knows how to tell a good story. His twenty-year-old main character, Nat Dylan, is on a mission to revenge the killing of his three older brothers. But the man he’s after, Jared Carter, turns out not to be the vicious villain he expected. Instead, that honor goes to a crook named Jackson who has more nefarious schemes in the works than you can count.
Young Dylan has to learn that his eye-for-an-eye code of the West isn’t going to keep him from doing something he’s going to regret. He wants to be an honorable man who kills only in self-defense. I’m no murderer, he insists. But he’s prevented from evening the score with Carter, who refuses to cooperate by being the stereotypical bad guy.
For one thing, he’s committed to thwarting the corrupt shenanigans of the real villain, Jackson. Eventually, Dylan finds a way to resolve the moral conflict he’s found himself in, thanks in part to the lessons of a pretty schoolteacher who once taught him about the Knights of the Roundtable.
That’s enough of the plot to give you an idea. Tyrell keeps it all interesting by peopling the story with a cast of well-drawn supporting characters. Not least is Carmen, the fiery sole heir of a nearby land grant spread, who takes more than a casual interest in our boy. A kiss on the cheek from her lips keeps him from getting a good night’s sleep.
There’s Frenchy, the brutal, cold-blooded foreman of Jackson’s ranch. And there’s Doc Richards, who’s a real professional and not your usual hard-drinking, small-town sawbones. Sheriff Campbell steps off the page with warmth and authority. So does U.S. Marshal Ness Havelock, a reformed gunman from one of Tyrell’s earlier novels.
And Tyrell takes time to provide historical details to add realistic depth to the story. His characters’ dialogue is sprinkled with terms that had me going to Ramon Adams’ “Cowboy Dictionary,” and there’s careful attention to firearms. We always know who is carrying what kind of gun and how they are carrying it. We also spend a few hours with a freighter train of oxen pulling Murphy wagons.
Of particular interest to me was the account Tyrell gives of how a man with a gutshot wound is given proper medical care and then over the following days recovers. How often do you get that in a western? In another scene, we get to witness the amputation of a man’s leg.
Tyrell’s story really comes to life in the action scenes. There’s a convincing shootout on the streets of town at dusk between Dylan and three men who take exception to him in a bar. More thrilling is the gun battle at Jackson’s ranch, where the Sheriff attempts to deliver an arrest warrant. Tyrell is especially good at keeping the logistics of a multi-character action scene like this clear and easy to follow. It reads like a well-cut cinematic sequence.
Altogether, the novel is something of a frontier morality tale and coming-of-age story, with a grounding in historical fact and more than a little excitement. Your saltshaker may be empty by now, but if I did my job here, you should have at least an idea of what author Tyrell has written for us.
Posted by Ron Scheer at 9:30 AM