Ramon Adams (1889-1976) was an enthusiastic chronicler of cowboy life and produced a shelf of books on the subject. Thank all the lucky stars that he had an ear for spoken language. His collections of cowboy talk are a treasure trove of western expressions that would have gotten away if he hadn’t collected them.

First published in 1936 as Cowboy Lingo, his dictionary was expanded in 1944 under the title Western Words. In 1968 it was expanded again to include terms from several other walks of life, from stagecoach drivers, to miners, loggers, and gamblers. It’s from this edition, called The Cowboy Dictionary that I offer the following examples: 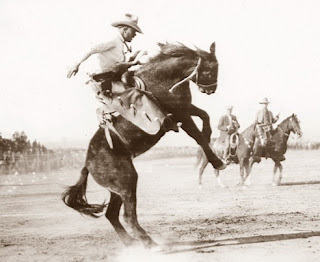 all horns and rattles – Said of someone displaying a fit of temper. A man in this mood, as one cowboy said, “maybe don’t say nothin’, but it ain’t safe to ask questions.”
beast with a bellyful of bedsprings – A good bucking horse.
comb his hair – To hit someone over the head with the barrel of a pistol. After a person had his “hair parted” in this manner, he was, in the language of one cowman, apt to “sleep as gentle as a dead calf.”
don’t know sic ’em – A cowboy’s expression for “ignorant.”
Elk River – A gambler’s term for three tens in a poker hand.
fryin’ size – A cowboy’s term for a youth; also a man of short stature.
gravy run – In rodeo, a lucky draw, an animal that makes it easy to win, such as a bronc that bucks well every time or a consistent steer that is easy to catch and throw.
heart-and-hand woman – A wife obtained through a matrimonial agency. The name originated from the old magazine “The Heart and Hand,” published by a matrimonial bureau. The cowboy’s simple soul believed all the descriptions. Hell, wasn’t it printed!
Idaho brain storm – A cowboy’s name for a tornado. A whirling sandstorm.
John B. – A cowboy’s hat, named for its maker, John B. Stetson.
killpecker guard – In many sections of the country, the period of cattle herding from sundown until 8:00 pm.
leavin’ Cheyenne – A cowboy expression for “going away.” Taken from the cowboy song “Goodbye, Old Paint, I’m Leavin’ Cheyenne,” a song usually used as a finale at a cowboy dance, much in the way that “Home, Sweet, Home” was used in other sections of the country.
makin’ the calico crack – Swinging a girl off the floor in an old fashioned square dance.
no breakfast forever – Someone caught in a prairie fire and burned to death.
over the willows – A cowboy’s expression meaning “high water.” If the trail boss rode back to the herd after he had viewed the turbulent river ahead and announced that the river was over the willows, he meant that it was at flood stage and that there would be several hundred yards of swimming water.
pin crape on the kid – Said of a rustler that killed a mother cow to steal her calf.
quirly – A cowboy’s name for a cigarette.
ranahan – A top cowhand; an efficient cowboy; often shortened to “ranny.”
scratching gravel – Climbing a steep bank on horseback.
too much mustard – A man who has the habit of bragging, picking quarrels, or otherwise making himself disagreeable.
unshucked – A cowboy’s word for “naked.” When referring to a gun, as in “unshucked his gun,” it meant that the man had drawn it from the holster.
velvet couch – A cowboy’s bedroll.
wooshers – A cowboy’s name for hogs.
yack – A stupid person.
zanja – An arroyo. An irrigation ditch. From the Spanish.
Picture credits:
1) Rodeo rider Mike Stewart, winning the Southwestern Bucking Horse Championship and Silver Mounted Saddle Trophy at Tucson, Feb 22, 1925; tucsonrodeoparade.org
Coming up: Review of Gary Dobbs’ new novel A Policeman’s Lot and movie reviews of Yellow Sky (1948) and No Name on the Bullet (1959)
Posted by Ron Scheer at 6:14 AM