Bandits. Culley devotes three lengthy chapters to the bandits who robbed trains, stole, and took refuge in the wild country of northeast New Mexico in the 1890s. One of them, Sam Ketchum, cowboys for a while at the Bell and then teams up with another man, possibly his brother Tom, for a series of robberies. Eventually they kill a storekeeper and a Mexican, who were on their trail and unfortunately caught up with them. 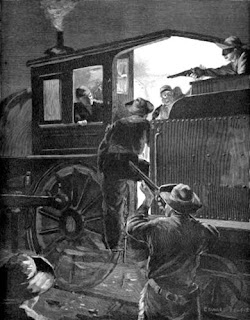 Three train robbers, including Sam Ketchum have a shootout in a canyon near Cimarron, killing a sheriff and a deputy, then escaping though outnumbered 10 to 3. Sam Ketchum was eventually captured and died shortly after of blood poisoning from bullet wounds.
A second bandit, William McGinnis, was captured and tried for murder. Although found guilty by the jury, he was saved from hanging apparently because his “gallant appearance and refined manner” won their sympathy. He was released from prison only a few years later. Culley wonders who the man really was, his given name, his origins, and how he became a bandit.
The third man, believed to be Tom Capehart, broke out of prison with Butch Cassidy. And Culley relates what he knows about Cassidy’s sojourn in South America. Some say he was killed there, he notes, but there are conflicting reports.
Culley then turns to an account of Sam’s brother, Tom “Black Jack” Ketchum. Alone after the breakup of his gang, he tries first to raise some money by gambling, and when he loses $1000 at that, he attempts to rob a train.
There is a suspensefully described description of his solo effort, which fails. He gets his arm full of buckshot and is eventually captured and arrested. After his trial, in which he is convicted of armed robbery of a train, he is sentenced to death by hanging.
With one arm amputated (without anesthetic, by his choice, and without a whimper of complaint) this physically powerful man surrendered to his fate. Culley, who has opportunity to witness his train ride to prison, describes him as having the intelligence and instincts of a wild animal, who goes to his hanging without showing a loss of nerve.
Culley observes that many of the high-profile bandits of that time (and this was news to me) were in fact good cow men. They handled horses and cattle well, and one writer claimed that Butch Cassidy was a top trail boss. They would work as cowpunchers between robberies, though at a distance from their criminal activities and assuming other names. Meanwhile, they continued to identify with and trust other cowboys.
Culley regards many of them as men of character. While capable of brutality, he considers the instances of it rare. He credits them for their loyalty to each other and their trust in each other as highly capable men who were especially adept with firearms.
Many, he argues, were forced by circumstances into breaking the law. They were not motivated by publicity or the prospect of gaining a reputation. Unlike robber barons like the Rockefellers, he says, they didn’t prey upon the poor and disadvantaged. By and large they were also respectful of women.
He notes two key characteristics of these men (a) their intimate knowledge of a vast western terrain, and (b) their ability to travel quickly by night. Together with their usually fine horses, they were able to make quick getaways.
Many were also excellent physical specimens. Their criminal activities aside, they exhibited the qualities of first-class range men: courage, endurance, and self-reliance. These traits made them admirable and heroic to working cowboys, who told and retold their stories around the campfire. Recalling these men, Culley regards nothing about the life of that period as “more distinctively Western.”
Picture source: Harper's Weekly, wood engraving, January 16, 1892
Next time: Gunmen of the frontier
Posted by Ron Scheer at 5:18 AM