To start with the title, a warlock is a male witch, and that already says a lot about the tone and subtext of this film. While brightly lighted, both indoors and out, there are more than enough dirty deeds and moral ambiguity to make this a western noir.

It’s a two-hour, big budget production with a large cast, and multiple plot strands. The plot, in fact, is too complex for a simple synopsis here. Characters switch alliances. They shift from one place on the moral spectrum to another. Action slows for exposition and the clarifying of motives. 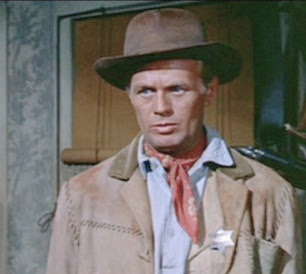 Somehow it all holds together, even largely succeeds, surely because of capable direction from Edward Dmytryk. Mostly forgotten after its release in 1959, its reputation has grown over the decades as critics and western fans have rediscovered it.
Parallels to recent history. Dmytryk (a naturalized citizen of Ukrainian immigrant parents) had his troubles with the HUAC. After completing a real film noir, Crossfire (1947), he did time before naming names and resuming his career in Hollywood. All of which may help account for his handling of the material in this film.
The hero, played by Richard Widmark, is a former outlaw turned deputy sheriff, with a newfound respect for the law. He has troubles on both sides: (a) his ruthless former gang members and (b) a paid gunman, played by Henry Fonda, hired to clean up the town his own way. Steering a middle course between them, Widmark’s deputy is tentative but determined to represent duly constituted authority, even if it costs him his life.
He’s a decent man troubled by his past. In an extended scene that adds not a lot to the plot, he relates an incident in which the members of his gang disguised themselves as Apaches and killed 37 Mexicans trying to retrieve stolen cattle.
For me, it’s all a nice parallel of the situation in which Dymytryk found himself a decade before. Haunted by his former associations on the political left and up against a powerful, quasi-legal adversary on the right.
Another parallel. The twist in all this is a third character, played by Anthony Quinn. Fonda’s and Quinn’s characters have been compared to Wyatt Earp and Doc Holliday. Earp’s methods of keeping the peace were not unlike the hired gunman’s in this film (Fonda even played Earp before in My Darling Clementine). 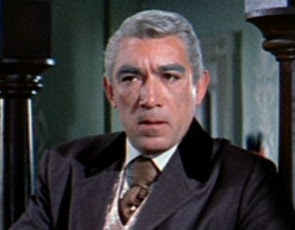 Quinn’s man, like Holliday, was (a) good with a gun, (b) loyal to a man he considered his best friend, (c) something of a dandy, (d) the associate of a high-class hooker, played here by Dorothy Malone, and (e) suffering an affliction – not tuberculosis, but a club foot.
That club foot. By Hollywood convention, a signal of inner depravity. Dorothy Malone’s character gets to call him the c-word. The one that rhymes with “ripple.” You could argue that he’s the real “warlock” of the story.
A wrinkle in all this is the thinly veiled homoerotic undertone to the relationship between the two men. Being proprietors of a high-end saloon, they wear spiffy clothes. There are spoken preferences for silk sheets, and Quinn’s character is oddly interested in interior decoration. He’s also the only man of the three who doesn’t pair up with one of the women in the cast. Which makes for yet another allusion to the anti-communist witch hunts in Washington: the association between Joseph McCarthy and Roy Cohn.
I could be stretching the evidence, but it’s too easy to see the film as Dmytryk’s exoneration of himself. A little guy caught between powerful adversaries, who just wants to do what’s right. And that means standing for the law. Period.
Fox has released this film on DVD in widescreen. Not sure if the letterbox format actually represents the full original Cinemascope aspect ratio. But it looks really good. The streets of town are peopled with extras, and even in interiors, Dmytryk makes dramatic use of the full frame. The few location shots of rocky desert are breathtaking. The whole film cries out to be seen on the big screen.
Authenticity. The exteriors of the town were shot on the studio’s western set in Malibu. It looks awfully neat and orderly for a frontier mining town – certainly a far cry from TV’s Deadwood. A couple of interiors are set in hugely spacious kitchens despite their owners’ apparent inability to afford indoor plumbing. There’s a hand-pump at each sink.
The year is 1881, another parallel with Earp and Holliday. The OK corral gunfight with the Clantons took place in Tombstone that same year. The Clanton bunch was also known as "the Cowboys," and they have their parallel in the so-called "cowboys" who make up the gang of rustlers, bandits, and hooligans in the film and do anything but work on a ranch herding cattle.

The costuming is what you’d expect in a 1959 western, not a lot of thought given to authenticity. While the gang members are supposed to look like cowboys, Widmark is dressed more Depression era, with a worn denim jacket, dust-colored jeans, and a narrow-brimmed, low-crowned hat. This changes when he becomes a deputy and on the miserable wages of a lawman is suddenly able to outfit himself in a nice suit, white shirt, and ribbon tie.
Dorothy Malone’s spectacular dress as she arrives in town comes with an appropriately Victorian bustle. Her off-the-shoulder top in a later scene is more 1950s than period. And both women in the film have glorious blonde hair that suggests easy access to a Beverly Hills hairdresser.
For the western writers reading this. The screenplay was based on a novel by Oakley Hall, a distinguished West Coast novelist, who taught writing at UC Irvine and also wrote mysteries. Warlock is one of his three novels set in the Old West. It was a finalist for a Pulitzer Prize in 1958, and it's still in print.
Posted by Ron Scheer at 9:26 AM