This post-war western is set somewhere in the Southwest in post-Civil-War 1867. Gregory Peck leads a gang of six bank robbers who escape across a vast salt flat and fetch up in a ghost town. Like Prospero and Miranda, a prospector and his granddaughter are the only inhabitants. They’ve successfully extracted a fortune in gold, and the gun-toting granddaughter (Anne Baxter) is all for the gang’s immediate departure. 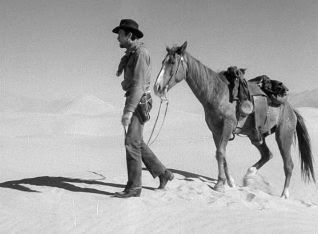 You can forget any memory of Peck as kindly Atticus Finch. He is fully believable as a tough-as-nails gang leader, who isn’t leaving town without the gold or the girl. For both, he has to contend with two fellow gang members, played by a snarly Richard Widmark and tall, dark, and long-legged John Russell (TV’s “Lawman”). Harry Morgan (TV’s Col. Potter on “M.A.S.H.”) plays another member of the gang. Well-written, well directed, well cast, the gang is a well-drawn collection of individuals, each with his own personality and intentions.
While the men are also well outfitted for their various roles as desperate men of the period, Anne Baxter looks like she stepped straight off the cover of a pulp novel. She’s wearing a man’s shirt for a top, and a very snug pair of Levi’s. She’s as tough as any man in the bunch, keeps a shotgun handy, and goes by the name of “Mike.”
Anyone analyzing gender roles in the film would have a heyday with this. One objective of the story is to “feminize” her character. The presence of the men competing for her attention is supposed to awaken her sexuality, long-starved by her life in the desert. By the end of the film, she’s wearing a bonnet and there’s the distinct possibility of a wedding. (I won’t give away which of the six men she picks.)
Production Code notions of “morality” no doubt required that the film end on this note. Peck’s character even returns the money his gang stole from the bank at the start of the film. A true noir film wouldn’t have tacked on this kind of happy ending. But up until this point, it has been an entertaining walk on the dark side.

The sexual tension in the film may be what’s most notable, as the women-starved men get stirred up by the presence of one. A memorable scene occurs when John Russell’s character tries to “cool off” one of the other men by holding his head underwater. Not too family friendly.
The film was shot in Death Valley and at a western-town set near Lone Pine, California, a favorite Hollywood location. First built for Tom Mix during the silent era, it was “aged” to look like a deserted boomtown left to the elements. Director William Wellman and cinematographer Joseph MacDonald provide a film-noir visual style (the movie was shot in living black and white) appropriate to its downbeat mood.
I could be wrong, but when I watch a film like this from the late 1940s, I think of the post-war mood of the country. Returning soldiers faced uncertain adjustment to peacetime lives and atomic weapons testing ushered in the Cold War. As Hollywood reflected this mood, it became an easy target for those with a different agenda and the political influence to silence divergent voices. When this film was made, HUAC was already having its first hearings.
Picture credit: coffeecoffeeandmorecoffee.com
Coming up: Review of No Name on the Bullet and women writers of the West.
Posted by Ron Scheer at 5:19 AM