Some western enthusiasts pay attention to the firearms used in cowboy movies. I’m the guy noticing the hats. I’m not a big hat collector, or even a small one. Four hats isn’t a collection. But for me the hat a man wears can be the most expressive part of his personality, and it’s something western filmmakers often get wrong. 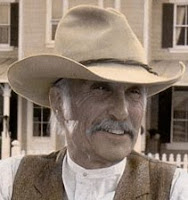 Historical accuracy is typically trumped by Hollywood conventions and contemporary fashion. To take a more recent example, the hat Robert Duvall wears in Lonesome Dove is a high-crowned, broad-brimmed Stetson. The crown has a long, prominent crease in the front and the brim is hand-rolled from use. It doesn't look like a hat that's had a lot of wear. But it sure looks authentic. There’s apparently little evidence, however, that cowboys wore their hats like this in 1876, which is when the story takes place.
The Boss of the Plains Stetson originated in 1865 and became standard apparel among working cowboys. Its wide, flat brim was protection against sun and weather, and the soft high crown helped regulate the air temperature on the wearer’s head. Dents and creases came chiefly from handling. A working man’s hat acquired sweat stains, dust, mud splatters, and no doubt cowshit. He threw it away when it was no longer wearable. After all, at $5 the darn things weren’t cheap.

I’ve read that some cowboys individualized their hats with decorative hatbands. Cowboy artist Charles Russell’s hat was like that, but then he was an artist. I’ve also read that you could tell the region a cowboy came from, even the outfit he worked for, by the shape of his hat. It’s hard to find any evidence of that in old photographs either. In a photo of cowboys eating a meal around the chuck wagon, for example, no two hats appear to be alike. 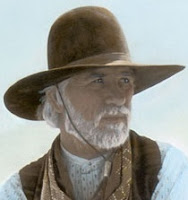 If there was a custom for denting or creasing a hat’s crown in a particular way, it was to pinch it on four sides into a point on top. Otherwise, cowboys seemed inclined to preserve the hat’s original shape. Tommy Lee Jones’ black hat in Lonesome Dove, with its rounded crown and flat brim, may stand as a faithful example of that.
The stiff, creased, potato-chip brim cowboy hats you’ll find in a western wear store today are modern inventions. It’s been said that the curved-up brims make it easier for four cowboys to ride in a pickup. That may be a joke. But while they are recognized around the world today as “cowboy hats,” they aren’t what you’d have seen on the open range in the 1880s.
The so-called 10-gallon hat with its over-sized crown and brim became identified for a while with cowboys when it began appearing in the silent westerns of the 1920s. Think of Tom Mix, who probably did more than any cowboy actor to popularize it. While working cowboys reportedly loved western movies and took their fashion cues from them, that huge hat never to my knowledge caught on in real life, and westerns from later decades show a return to smaller hats. 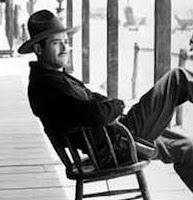 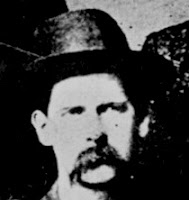 Now, the hat we’ve been talking about is a working cowboy’s hat. Put it on another man, and you raise another issue. Consider the example of Wyatt Earp. The man was a gambler, mining speculator, saloon owner, part-time lawman. When we find him at the start of John Ford’s My Darling Clementine (1946), he’s a stockman herding cattle across southern Arizona to California, and he’s wearing an appropriately high-crowned, neutral-colored Stetson. See Henry Fonda here on the left in the role. But as he takes the job of marshal in Tombstone, he never changes that hat. (History tells us, by the way, that Earp and his brothers weren't in the cattle business when they arrived in Tombstone. Nor were they on their way to California - although Wyatt did eventually spend his latter years there.)
We have photos of the real Wyatt Earp, and they show him wearing what a townsman and business operator would have been wearing. It’s a black hat, flat on top, with rounded edges, and a flat narrow brim. Later Wyatt Earps from Hollywood got the color right, but following movie convention they gave him a higher crown and a wider brim, curved upward on both sides, so that he looks more like a cowboy or rancher. 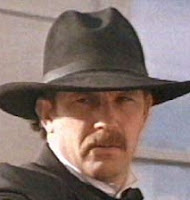 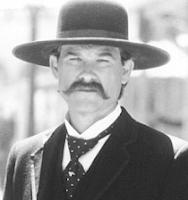 Check it out the next time you see any of the films about Earp, like Wichita (1955), Gunfight at the OK Corral (1957), Hour of the Gun (1967). Hugh O’Brian in TV’s 1950s series “The Legend of Wyatt Earp” gets closer to what the man seems to have worn. And Kurt Russell in Tombstone (1993) even closer. Kevin Costner, however, in his Wyatt Earp (1994) reverts to the cowboy-style hat, with a crease in the front. The reason, I’m guessing, is that he looks better in it.
This by no means exhausts the subject, but if it makes anyone pay greater notice to the style and shape of a man’s hat the next time they watch a western, then my work has been done.
Posted by Ron Scheer at 11:03 AM